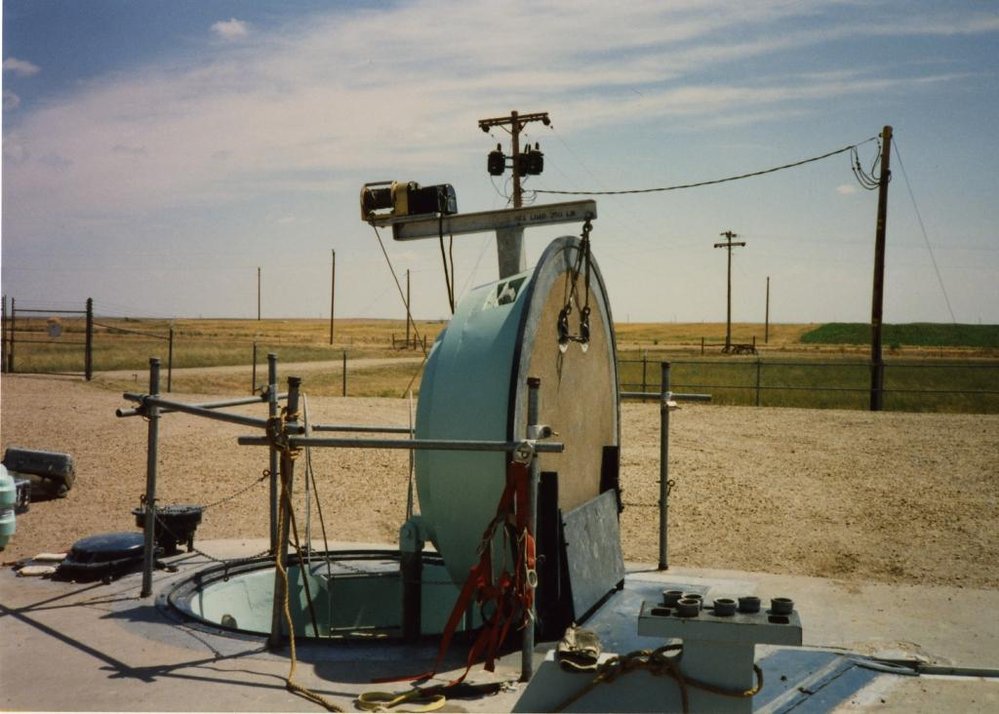 The large blue ‘lid’ in front of the silo is the Personnel Access Hatch. Although the site was primarily unmanned, escorted maintenance teams periodically visited here for scheduled upkeep or to repair problems that might arise.

The Personnel Access Hatch is a heavily-reinforced door, weighing five tons. Both Security and Maintenance strictly controlled access through this hatch to the interior of the silo via a process known as “split knowledge.” Only Security could open the first half of the system, the blue “A-Circuit” in front of the hatch, a small outer vault door all its own. The security escort entered a combination provided to them by the Flight Security Controller. After opening the lock they removed the ‘A-circuit’, retracted a locking shaft, and flipped a switch that hydraulically raised the hatch. The door takes several minutes to open. Once open, the maintenance team chief reached another combination lock. Entering an encoded combination here, an elevator-type “B-Plug” with a telescoping ladder slowly lowered to provide access to the equipment room. Opening the “B-Plug” coincided with how long it took an Alarm Response Team to arrive from Delta-01, should anyone have broken protocol or attempted to gain unauthorized access.

Among many areas here, the equipment room, the interior of the silo were considered “No-Lone Zones”. Personnel had to remain within visual contact of one another at all times. Any area of the missile field where the command and control of nuclear weapons could be compromised was considered a “No-Lone Zone”.

Daily work “trips” could last up to 16 hours at a time. This impacted Maintenance and Security troops alike. Since Maintenance couldn’t access a site without Security providing the first half of their entry, even after Maintenance had re-secured their “B-Side” areas, Security still had to install a new “A-Side” combination and re-secure it.

On most “trips”, crews spent over half their work-day in long drives to and from sites, as well as the meticulous process of gaining access to or securing the site. Long days often broke a mandatory safety timeline, forcing crews and their escorts to Remain Overnight (R.O.N.) at the nearest Launch Control Facility, like Delta-01. Accommodations were acceptable and the food decent, but few crews enjoyed getting stuck in the field. It was a common source of frustration among many.