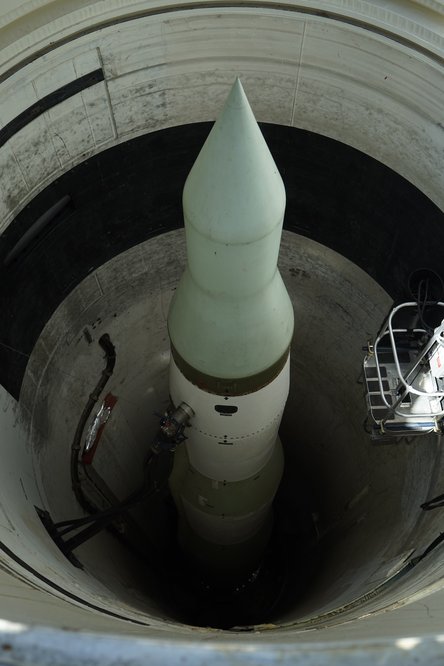 A Technological Wonder And Terror

Below is a Minuteman II training missile in launch configuration. Minuteman was a technological wonder for its day; a 3-stage, solid-fueled, sub-orbital spacecraft nearly 60 feet tall and weighing thirty-eight tons. Its combined engines produced over 235,000 pounds of thrust that propelled its payload to a speed of 4 miles per second. Inside the nose (the Reentry Vehicle) was a Whiskey-56 thermonuclear warhead that produced an explosive yield of 1.2 megatons, more than 80 times more powerful than the Hiroshima bomb.

And yet: this missile was just one of 10 in Delta Flight, and there were 15 missile flights of 10 missiles each here in the 44th Missile Wing, dispersed across 13,500 square miles of western South Dakota. This was only one of six Minuteman wings providing deterrent coverage of 1,000 ICBMs throughout the U.S.

If this weapon had been launched, the following would happen: The missile combat crew at Delta-01 would, upon proper orders, send a launch command to the missile’s computer. Underground cables connected the control center to the ten silos of its flight. This command was received through the umbilical on the side of the missile. After processing this command, the umbilical detached. Next, ballistic gas generator detonations would forcefully propel this massive 90-ton door covering the silo through the fence and out of the way. The first stage would ignite, a roar of hellfire erupt, and within three seconds the missile would leap skyward, bound for it’s target half a world away.

After launch, each of the three stages burned for about one minute each, and after the third stage separated, the warhead could reach over 15,000 miles per hour. At such speeds the warhead could strike a target over 6,000 miles away in just 30 minutes.

180 seconds post-launch, the last rocket stage would burn out and fall away. The warheads flight path rose approximately 700 miles above the Earth. Reentering the atmosphere, spinning ballistically, and utilizing the forces of aerodynamic drag and gravity, it raced to destruction. Its advanced guidance system provided an accuracy radius of one quarter-mile.

Detonation would utterly consume a target area. For over a mile in all directions all living things would vaporize; all man-made objects be incinerated. Nothing recognizable would remain. Over 200 mph winds would obliterate even stoutly-constructed buildings within three miles. Beyond lethal doses of radiation, people up to eight miles away would be flash-blinded. Lingering radiation would make the area uninhabitable for centuries to come.