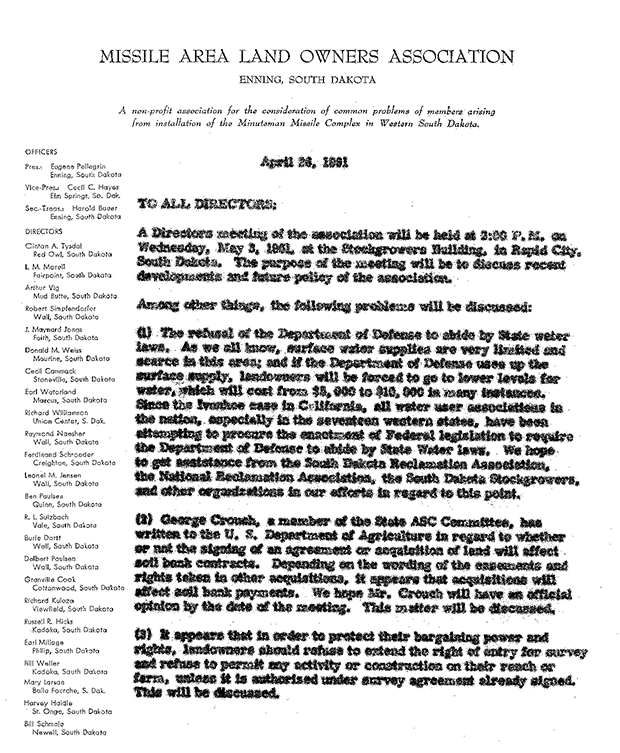 As you open and close the gate for the sidewalk, you are practicing good manners for ranch country. The landscape around Delta-01 was open ranch land, and all manner of live stock might be grazing in adjacent fields, roads, and even the driveway to the launch control facility. Leaving a ranch gate the way you found it is considered to be good manners in ranch country.

Delta Flight was part of the 44th Strategic Missile Wing, which spread over 13,500 square miles of western South Dakota, impacting the lives of many farmers and ranchers. In return for hundreds of miles of improved gravel roads and electric power to rural, previously-unserved areas, employment for local labor in the construction process, and the economic impact of the increased Air Force presence, local residents became uneasy partners with the nation’s rapidly growing nuclear force in the early 1960’s.

The meeting of national security and practical local needs did not occur without conflict. The issue of land rights took on great importance. Most of the land needed for the system was in private hands. The Air Force had to acquire its pre-selected sites and do so quickly, whether through direct purchase, or, in extreme cases, the right of eminent domain. Some landowners began to think that strategic planners in far off military headquarters were playing God with their pastures.

To ensure that the government took landowners’ rights into consideration during site selection and fairly compensated landowners, a group of farmers and ranchers formed the Minuteman Missile Area Landowners Association in the early 1960s. The association disseminated information to area landowners, believing that working collectively would aid the defense effort while safeguarding their private interests.